I am now almost half-way to my goal of losing 40 lbs. I have lost 18.5 lbs. This past week was about half Nutrisystem and half my own food. This coming week will be almost completely my own food. I just have to be more conscious of the calories and the content of the food that I eat.

We'll see if I can do just as good as on Nutrisystem. This last week proved to me that it can be done. Now that I am used to smaller portion sizes and snacking less, I'm on my way.

After this month, I might try it on my own...the whole secret is portion control. I had to force myself to eat less for each meal on Nutrisystems. Now that I know the right portion, I should be able to do it on my own.

Last Saturday, Alicia and I signed a contract on a new home in Chandler! We are very excited to move out of the bottom floor of Alicia's parents' townhouse. We will have to get comfortable there, however, because the build will take 6 to 8 months. We're hoping to be in the house in April 2008.

Here is a computerized image of the home we're building:

I have lost 3 more lbs last week on Nutrisystems!

I started the Nutrisystem diet (I want to be like Dan Marino) last Tuesday 10/02/2007 so every week on Tuesday I'm going to weigh myself and report the results. This week I lost a whopping 9 lbs! I'm still shocked and skeptical of our cheap little scale we have at home...but that's my story and I'm stickin' to it!

The NS diet has been extremely tough at first, but I'm slowly getting used to it. There are some "gotchas" that I didn't know when I signed up:
1) You have to compliment or add to the NS meals. So, when you pay over $300 for a month of food, you will also have to buy additional food, such as salad, other veggies, maybe wheat bread, etc.
2) Be prepared to feel very hungry at first. I was starving for the first few days, especially during work. Now I am still hungry around 4pm, but that was the case before NS.
3) Don't just get the pre-selected menu from the "Favorites" list. Maybe go onto the NS website to the forums and see what others like...and most importantly what they DON'T LIKE.

Well, I'm on my 2nd week and hopefully will see some good results in the weeks to come! 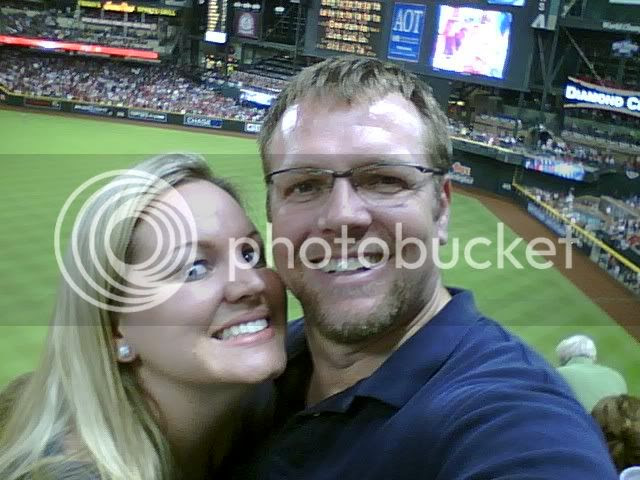 So, my surprise on Wednesday for Alicia's birthday was 2 tickets to the first post-season playoff game between the Dbacks and the Cubs. The Diamondbacks won the game 3-1...there were 2 home runs by the Dbacks so it was pretty exciting!

Our tickets were section 305 row 3, so we were in the upper deck, but only 3 rows back, so the seats were actually pretty good. We were both happy about that!

So, these Cubs fans behind us yelled "Sit down Lady!" She ignored them for a while, but eventually sat down. I cheered, not for the Dbacks, but because now I could see the game.

She didn't stand as much after that, so it was a success!

When we left the stadium, right after we got outside and were on the sidewalk, we heard feet pounding behind us. I just figured there were some teenage kids running to get back to their car...screwing around...but then a Cubs fan and two cops brushed by us!

One cop said, "get down on the ground or I'll have to taze you!" I could see the red laser spot on the Cubs fan's back. The cops tackled him and started handcuffing him right there in front of us.

Today is Alicia's 30th birthday and I know she is partly excited and partly depressed. I remember that for my 30th birthday I was up in Redmond, WA with my sister and her family.

I have a surprise for Alicia this afternoon...we're going to do something fun!

Yesterday I got my big box of Nutrisystem food. It is supposed to be a 30 day supply of food, but I think I could put it all down in about a week! There are all these little snack bars and little cups that remind me of the Cup O' Noodles. I was excited to get my food and to be honest was expecting the serving size to be a little bigger.

Another thing I realized after reading the instruction booklet that came with the food is that I will have to supplement my meals with fruit, salads, dairy, carbs, etc. For example, this morning I had a few granules of low fat granola cereal (I think my cereal bowl actually laughed at me) and I provided milk, a piece of whole wheat toast, and a banana. Most of the food for breakfast was provided by me....heck, I could have had a piece of toast, a banana, and a glass of milk and been fine.

I committed, so I am sticking to it. I'm thinking of this experience as training myself to eat smaller portions more times a day. I've known for over 15 years that this is how I should be eating, and have only been successful for short periods of time. This will be one of those times, but hopefully I can stick with this philosophy longer this time.

Sunday was our 2 year anniversary, so Alicia and I celebrated by dining at our favorite high-class restaraunt....T. Cooks. This was the place where over two years ago I proposed to Alicia, so it's a special location for us.

Dinner was wonderful...we sat on the back patio at a table that had been specially prepared with rose petals. Our waiter congratulated us on our anniversary and gave us special anniversary menus. We both ordered the fillet because you can cut it with a butter knife and it melts in your mouth. Our dessert plate had "Happy Anniversary" written on the brim with frozen chocolate, which was a nice touch.

After eating, we went back to the place where I proposed to Alicia, which was a small gazebo that overlooked a grass courtyard. She reminded me how I got on both knees and begged her to marry me. I don't remember that, but I do know how nervous I was and that I didn't know where I was going to actually pop the question beforehand.