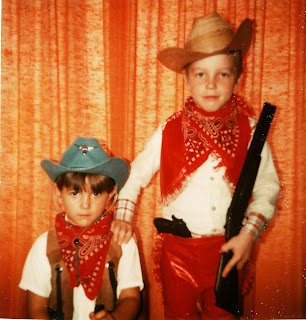 Does anyone out there recognize these two outlaws? This is the most recent photo of the two brothers. They call themselves "The Greasy Crows".

They were last seen playing baseball out in their back yard in Pingree, Idaho with another brother who does not seem to be part of their gang, but is considered dangerous and may be armed!

The father of these outlaws is big and burly, and is known to wear a piece of aluminum irrigation pipe on his right shin bone. This metal shin armour is said to stop bullets.

The mother of this unruly bunch is probably the most fierce of all. She can make a grown man cry like a baby girl with one look of disappointment. The whole family seems to revolve around her and she will protect them with her life.

Watch out for the "Three Sisters" as they are known throughout the Northwest, and even down into Arizona. They have been known to shoot first and ask questions later. When the men are away from the house they are so dark that they eat the homeless, the "Hobos" as some call them, while they watch horror movies.