Rachel and I saw Shaq 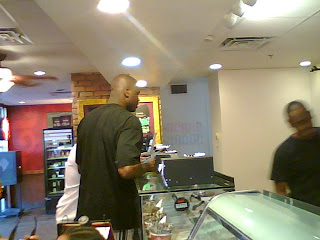 Last Wednesday evening, my sister Rachel and I were on Mill Ave. in Tempe, AZ just walking around, going to the various shops and we saw a huge black man getting out of an even bigger black truck.

It was Shaquille O'Neal from the Phoenix Suns! He went into a Cold Stone Creamery for some ice cream where I was able to snap a couple of photos. I'm now considering changing my career to Paparazzi Professional. :)

Saturday Alicia and I were able to go to the 3rd Playoff game between the Suns and the San Antonio Spurs. We had great seats and it was an awesome experience, but the Suns played horribly and lost 115-99 which made them 0-3 in the best-of-seven playoff. No NBA team has ever came back to win a 7 game series when being down 0-3 so it doesn't look good for the Suns. Sunday the Suns ended up playing phenomenal and won 105-86!!! How does that happen?

We closed on our house last Thursday and moved in last weekend! We absolutely love our new house! Last week was a very stressful time for us because I was gone on business travel until Thursday night so Alicia had to take care of a lot of last minute issues while still working at her office.

We're glad last week is over, but we are still very busy! We have an upcoming vacation planned and we are getting certified for Scuba Diving. All the while, we still have to move little items from the town house over to the new house. We are still living in boxes, but love the additional space that we have!

I will post pics as soon as I can find time!