My aunt Gertrude passed away on Monday. Coincidentally, it was my brother Anthony's 33rd birthday....Jan 8 2007. Gertrude is my dad's older sister. My dad, who is 64, is the youngest of 12 children. His brothers, sisters, and their spouses (my aunts and uncles) are getting older and are being taken at a rapid rate it seems lately. This saddens me because they are great, outstanding people and unfortunately I don't know them very well.

For some reason, my dad's family is very close geographically, but not very close personally. Maybe my dad is close to his brothers and sisters, but I don't feel as close to them or my cousins as I would like. There is definietly love and respect between all in the family, but not a closeness like I see in other families. In the last few years one of my cousin's and I have been working on being closer and keeping in touch, but for the most part I don't feel close to my aunts, uncles, or cousins. It baffles me why this is because growing up we went EVERY month to a family gathering. You would think since I saw my extended family every month for all the years I was growing up that I would be close with all of them.

Please don't misunderstand me. I do not place any blame on anyone but myself....and I'm just more curious and asking myself "why" more than anything here. I feel a little guilty for not knowing my aunts and uncles better. Even though I am deeply saddened by deaths in my extended family, I love going to their funerals because I learn so much about their lives that I didn't ever know before. Is that terrible?

The good news about my Aunt Gertrude's death is that she will be able to be with her husband, Bob, who died a few years earlier. Bob was a great man and I'm sure she is anxious to be with him. The other good news is that my work allows two days bereavement for deaths of aunts or uncles, so I am going to be able to go to the funeral and see my family and extended family.

I would like to put some memories of Aunt Gertrude here, but unfortunately I have something working against me here. I have a terrible memory! I just know that Gertrude was a very friendly, kind, and gentle person. I can say that about all of my aunts...I have the greatest respect for them. I remember having family gatherings at Bob and Gertrude's house. We would meet in the basement, I think. I also remember that Gertrude was always smiling. I feel terrible for Gertrude's children because I know how hard it is to lose a mother. I pray for them that they will be comforted and wish that I could do something to ease their pain. 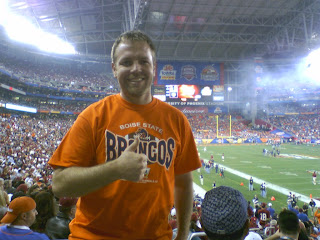 Oh my! Where do I begin??? This was the greatest sports event I have ever witnessed! My wife and I lyed in bed last night in awe; thoughts of the Fiesta Bowl dancing in our heads! "Do you believe what just happened?" we kept asking each other over and over again....

A small part of me is upset at Boise State for giving up their 28-10 lead and letting Oklahoma get back into the game. OU tied up the game 28-28 with a 2-point conversion with about 1:30 left in regulation! The OU fans were going wild!!!

Ok, so the game is not lost. Boise State has 2 time outs and can go down and maybe score a field goal, or if not they can win in OT, right??? Oh no, that's too easy and not spectacular enough, so Boise State's QB, Zabransky, on the first play throws an interception that was returned for a TD. Now, the OU fans were ecstatic!!! The BSU fans were in shock, upset, and disgusted all at the same time. I couldn't believe that we had lost the game. There was no way that BSU could score a TD in less than a minute in regulation!

BSU, with 2 time outs, goes down to around mid-field and gets into a 4th down situation with like 16 yards for a 1st with only about 20 seconds left in the game. I was still sick to my stomach about what had happened previously. It was over. Sure, Boise State would get some credibility for ALMOST beating a good team in the Big 12 in a bowl game, but they also couldn't hold onto a lead. I could see the headlines now.

Then! oh....and then! Zabransky throws down field to a receiver...enough for a 1st down and that was great...but wait! Why is the receiver stopping and not going out of bounds? Or at least trying to get more yardage? Just as soon as my question was asked, the receiver answered by pitching back a flea-flicker to the trailing receiver who ran it down the left sideline into the 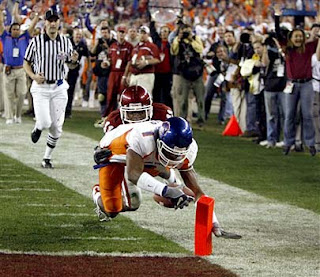 corner of the end zone!!!! Do you believe it???? With the extra point kick, BSU tied the game with 7 second left in the game!!! The pooch kick was successful and we're in OT baby!!! Now, the BSU fans were going wild!!! My hand still stings from all the high fives!

Boise State won the toss of the coin in OT and decided to give OU the ball first at the 25. Adrian Peterson, who BSU was able to contain the whole game decides to do what he does best and run it into the end zone on the first play! What a table turning, tide changing series of emotions!!! We Boise State fans were just plain worn out. The Oklahoma fans were again, annoying.

Now, it was BSU's turn to try and score a TD from the 25 yard line in hopes of keeping the OT alive. The great thing was that this was all happening at the end zone nearest to us, so we could see everything. Boise started running the ball and plugging ahead, and just barely getting a 1st down. Whew! Ok, then BSU was stopped on 3rd down when the running back got tackled with 2 yards remaining and the ball coming loose! No! The play was ruled down, but went for a review. I didn't see the replay, but everyone said that it looked as if it was a fumble...and the game would be over. Luckily, the referees looked at it carefully and ruled that the play stands as called....4th and 2 at about the 5 yard line! Ah! Please!!!

Now, the next play I will have to go back and see again because Zabransky (QB) shifted and the ball was actually hiked to the Wide Receiver, Peretta, who tossed the ball with incredible touch and accuracy into the Tight End in the End Zone for a TD!!!! Again, a change in tide of emotions! Boise State fans were now cheering their lungs out!

Without a hesitation, the offensive team stayed on the field, yes, I could see #5, Zabransky, out on the field with #41 Ian Johnson. They're going for it! Then Oklahoma called a time out. Ok, I thought now that Boise State was bluffing and would now kick an extra point and go for a 2nd round...but no! They were going for it!!! I was so nervous and was questioning the call.....why not get the 1 point and go for a 2nd round. Maybe BSU could stop OU next time?

The game rides on this one play, and Boise State's coach Chris Petersen had the juevos to put it all on the line! The ball was hiked to Zabransky and with all the action going to the right, he fakes the throw with his right hand, while hiding the football in his left hand behind his back. 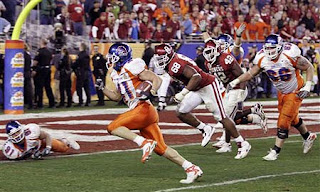 Ian Johnson acted as though he had thrown the ball and was pass protecting...but then grabbed the ball from Zabransky and ran the ball to the left corner of the end zone for A SUCCESSFUL 2-POINT CONVERSION!!!!! THE GAME IS OVER!!!!! BOISE STATE WINS!!!! I'M HUGGING SOME SWEATY GUYS THAT I DON'T EVEN KNOW BUT I DON'T CARE BECAUSE....I DON'T BELIEVE WHAT JUST HAPPENED!!!! OH MY!!!! EVERY ONE'S FACES ARE PALE AND IN DISBELIEF!!! THIS IS THE BEST SPORTING EVENT I HAVE EVER WITNESSED!!!!

End of scene, after the game we walked a half a mile to the car and were talking the whole way about how we can't believe what just happened. We continued the conversation in the car and my wife and I were still talking about it in bed when we couldn't sleep. I'm at work now and I'm still in shock and need psychological help I think! :) ha ha! Well, I'm out! Peace!