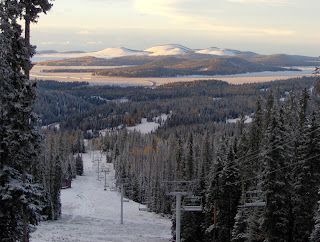 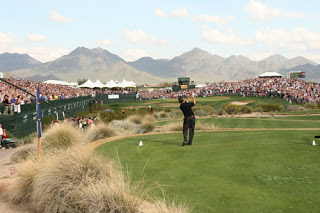 On Saturday, Jimmy and I went to the FBR Open, which is a PGA golf tournament held in Scottsdale, Arizona. Jimmy's good friend's son-in-law got us tickets for free, so that made it even better.

The weather was beautiful! I would say it was in the mid-70's and sunny skies. The first thing we did was go to the famous hole #16....the loudest hole in golf. It is a par 3 that is surrounded by grandstands. We were to the left of the tee box (if facing the hole) and midway between the tee box and the hole. The seats closer to the tee box, and those closer to the hole were taken because that's where all of the action is. The crowd would cheer if the golfer hit the ball onto the green, but was booed if otherwise. No golfer was too good to be booed...even Vijay Singh was booed when his ball hit the left edge of the green and rolled off. We stayed there to watch some of the famous golfers we knew, such as Vijay, Fred Funk, Mike Weir.

We spent most of the day near the green for hole #14. The hole is far enough from the entrance where it is actually quite peaceful and it is a strategic location because there is a hill where you can sit and watch putting on hole #14 and then walk a few paces to see the smashing drives on hole #15. On the top of the hill is a concession stand and the other side of the hill is the tee box for hole #14 and the green for #13. The highlight for me was seeing Bubba Watson hit a monster drive on #15 that faded to the left (he's left handed) and rolled into the lake. There were only two birdies on #14 the whole time we were sitting there. That was very disappointing.

On the way back to the car we had to dodge drunks and fight crowds, but we made it safely back to lot #8. We were lucky we had a parking pass to a lot that we could walk to because the lines for the shuttles for public parking were horrendous. One of the guys said that last year they waited an hour and a half just to get on the bus! The public parking is about 3 or 4 miles away though, so pick your poison.