Thursday we spent most of the day at the beach. There is a park on the beach that has trails and nice beaches, so we went there. It was a little peninsula that stuck out in the ocean with beaches on both sides and a jungle in the middle.

After relaxing on the beach for a while, we decided to head back and found a small trail that we hadn't explored yet. It was dark from all the trees and vegetation blocking the sun, and no one was on it, so it was quite eery. We kept seeing these bright colored crabs, orange and blue I think and we could also hear them scurrying in the bushes. As we went along there were more crabs and they were bigger, so we decided to go back the beach and go another way! :) 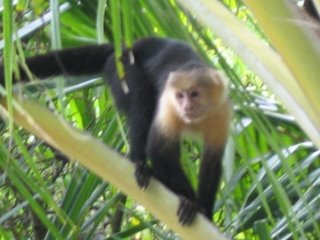 At the main trail to the beach a monkey all of a sudden jumped from a tree on one side of the trail to the other, which startled us! The white faced monkeys were right there. They came down and were looking around. I was standing right in front of one of the monkeys and I'll admit I was a little nervous, but I was getting some great video! :)

Later that afternoon while we were eating lunch at the hotel restaraunt, with a gorgeous view by the way, some squirrel monkeys were jumping and climbing around in the trees that were right next to our table. We thought after about ten of them that we wouldn't see any more, but there ended up being about thirty of them at least that came by. The squirrel monkeys were smaller and had a high pitched squeel....I think I would have thought their sound was from a bird if I couldn't see them with my eyes.

That night we met up with Alicia's friend Krissie, who lives in Costa Rica. She and her boyfriend, Jason, were very nice and took us to a local hangout spot in Quepos. We walked around the little town afterwards, which made Alicia nervous because it was dark and late and there were bums on the street. They also gave us a tour of Jason's father's house in Manuel Antonio, which was huge, with a great view and pool and rents for $10k a week! Bruce Willis and other stars have stayed there with their families.