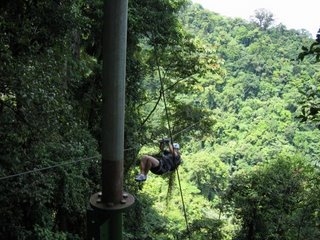 Monday morning we woke up early, ate the complimentary breakfast offered by the Tabacon resort, and started the drive to the Sky Trek zip line tours. We had good directions from the concierge at Tabacon, but we had no idea that the final road up to Sky Trek was going to be an off-road adventure! The road was gravel, or bigger rocks in some areas, and really wasn't too bad, but in our little Diahatsu it felt like we were going to need serious chiropractic care when we got back to the states! :)

When we arrived at Sky Tours, we were amazed at the beautiful view from the base. We were introduced to our tour guides, Hector and Elvis. We were lucky that we were there during the off season because normally they said 4-6 people would be on the tour, but in our case, we were the only ones! The views from up on the canopy platforms were amazing! We could see Lake Arenal and the Volcano Arenal.

Our tour guides showed us the basics of zip lining and then let us practice on a short line. After that, we were ready for the big lines! I had so much fun that I think my favorite thing I did on the trip! On the way down the zipline, I would get going so fast and then I could look to one side and see the lake and then look down and see how high I was above the trees. In all, I think there were around 8 different zip lines.

Afterwards, we went over to the Arenal Observatory, which is like a park with paved, and unpaved trails. The view of the volcano was great from there. We hiked around the grounds and saw some monkeys in the trees, took pictures of them, and then drove back to Tabacon.

At Tabacon we went swimming in their beautiful pool that was steps away from our room and ordered cheeseburgers. We were in paradise!