This was an interesting day!

Alamo was supposed to deliver our car to the hotel, so I had found the directions to the highway that would take us most of the way to our next destination, Volcano Arenal. However, we were taken clear across the city of San Jose to the rental car location and had to get new directions.

Driving in Costa Rica was quite an experience! You take your life into your own hands when you make the decision to get on the roads with those crazy Costa Rican drivers! The roads are narrow, with no lanes. If there is an opening, a taxi driver or a big bus will fill it somehow, darting in and out, squeezing in between a parked car and a truck. They are crazy! Most, if not all of our marital fighting was while we were driving. There are no street signs, limited directional signs, and ABSOLUTELY NO RULES!

Once we got out of San Jose, it was much better. The highway had actual lanes and was in decent shape. We were on our way to San Ramon, a midpoint on our trip to Arenal. This road was not as crazy as San Jose, but had its own peril. The road was windy and narrow. This didn't seem to phase the Ticos. They sped around the corners with no thought as to if someone was coming the other way. They would sometimes even pass us on these blind corners! 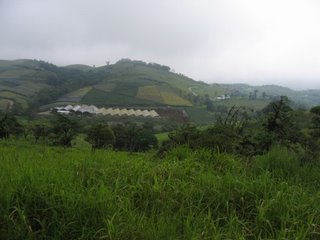 The countryside was beautiful. So green! Rolling hills, Cattle, and farms...something off of a postcard or travel magazine. Every once in a while there was a small quaint town with the villagers sitting right on the highway watching a local soccer game. Several times we had to avoid hitting a Tico walking right down the street and not even flinching as we went by. It seems that the people there don't care if they live or die. Alicia liked the chickens that were outside most of the houses along the highway. There were signs everywhere of Cheese for sale, clean bathrooms, canopy tours, horse riding, or steak houses.

Since there is a lot of rain in Costa Rica, it makes sense that there be a lot of rivers, creeks, and streams. Well, because of these waterways, there must also be a lot of bridges on the highway. Well, in Costa Rica, they decided not to make bridges where cars in both directions can pass at the same time. We went over so many narrow bridges, wide enough for only one car. They put a Ceda or yield sign on one side of the bridge so that if two cars arrive at the same time, the one with the yield sign must wait. The most interesting bridge was one that was long and narrow, with gaps about half a tire in width and toward the end of the bridge there was a huge piece missing, so they just took a ramp from an auto garage to "bridge the gap" so to speak. :)

The drive was way more beautiful than it was dangerous! When we arrived at La Fortuna, we knew we were close. We could see the huge volcano in the distance. From there, the road weaved up to the right of the volcano with restaurants and hotels lining the road. Finally, we saw the rock sign of Tabacon and the cobblestone driveway. The hotel was absolutely gorgeous and the staff was very nice. They greeted us with guava juice and rolled up wet towels to cool our face. 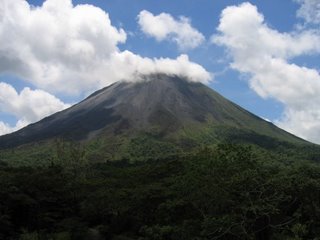 After getting settled into our spacious, beautiful room with a great view of the volcano, we walked down to the natural hot springs. Tabacon has a restaurant, swimming pools, and beautiful natural hot springs that seem as if they come down from the volcano. The walkways and paths are paved with small bridges and waterfalls, with lots of private pools tucked away into the vegetation. The flowers and plants around the whole premises are absolutely spectacular. We walked around, got into the pools, and I stood under the waterfall with the hot water pounding on my shoulders. It was like a free heated massage!